The Glitch Saga (Distant Horizon spin-off series): We’re temporarily testing a new cover for the series, starting with Whispers in the Code. If sales do better, then I’ll swap out the rest of the covers in the series. If not, then I’ll switch back to the original for the time being.

Also, Whispers in the Code is free from Oct 30th to Nov 3rd.

Afterward, it will be 99 cents throughout November.

If you haven’t already got a copy, now’s the time to grab it. 🙂

We’re expecting two or three more books in this series, and possibly a brief crossover between this series and Distant Horizon #3.

At the moment, we have a rough outline of book two, but the outline needs revision before we begin the rough draft.

Little One: I’ve managed to input a few more of Isaac’s notes into the manuscript between projects, though there are more to go.

Magebane: (Book Three of The Wishing Blade series) The print edition has been finalized! Click here to order the paperback!

Next up, writing book four.

TWB 4: (Book Four of The Wishing Blade series). The first chapter has been revised from Isaac’s notes and I have an idea of where additional revisions need to be remade for the next couple of chapters. Then I’ll need to continue writing the rough draft.

Runes and Ravens (Stone and String 3): I’ve got an idea for how this story is going to go, but I need to revise a few scenes and continue the rough draft. At the moment, I’m expecting this will be the final story in the series, but we’ll see.

The Secret in the Shadows: (Prequel novella for The Wishing Blade) On hold.

The Legends of Cirena – Collaborative Adventure Facebook Group: Recently finished the story of the Anethian priestess of Harethn, the god of travel, in the Darden Isles… though she might have gotten to travel a bit further than she expected.

Getting ready to start a new series. A cross-over has been voted on, so now we need to decide which characters will show up. 🙂

Ro’nor’s Story (A Legends of Cirena short story): I’ve almost finished revisions. Just a couple small polishing tweaks still need to be made, and then I’ll be sending it out to beta-readers. 🙂

I’m hoping to finish revisions on the next couple LoCCA stories before the end of the year, that way I can put them up for pre-order early next year.

I also have an idea of what the covers will look like, and I have a proof cover created for Ro’nor’s story.

Changeling: (Huntress #2) Needs to be formatted for print.

Huntress 3: Now has an outline! Still needs a bit more detail, but there’s enough there that I can start the rough draft. I’m planning to write this in November for NaNoWriMo.

This one will focus on the fairy tale of Rumplestiltskin. 🙂

I also have ideas for book four, though it still needs an outline.

Game Design: Currently on hold now that Isaac’s classes have started back up.

Space Adventure Comic: I’ve begun rendering scenes for the comic, though it’s been a bit slow going since the scenes are fairly large.

Add having to send the new laptop in for repair earlier in the month, and progress has been slow.

However, there has been progress, so that’s a plus. 🙂

Marketing: In mid-September we had a booth at Geek U.P. in Houghton, MI. This was a blast, and we had a lot of fun. We had our books and games available for sale, played several rounds of Phalanx with con-goers, and I also offered a few of my Daz-creation prints for sale.

A friend snapped this photo for us while everyone was on dinner break, which is why you don’t see many people walking around behind us (and it was one of the few times we were free). There were several really awesome cosplays there, too. 😀 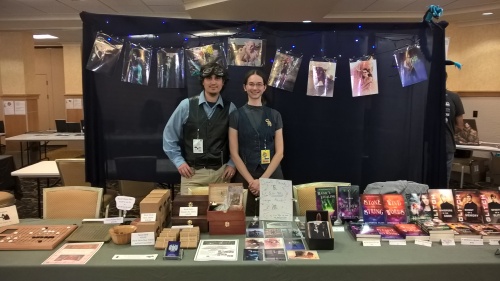 SBibb’s Photographic Illustration: Finished blurb work for one author and I’m now in the progress of proofreading a manuscript for another author.